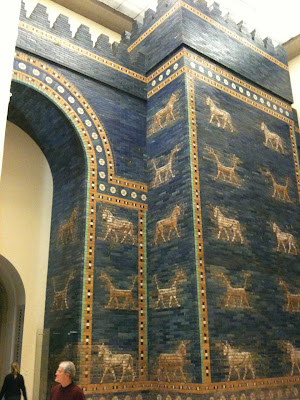 Photo: Ishtar Gate, Pergamon Museum, Berlin 2010.
I have been invited to serve on the Program Committee of SCENARIOS 2011, the 1st international workshop on Scenario-Based Testing . SCENARIOS 2011 is a satellite worksop of ICST 2011 to be held in Berlin, Germany, March 2011.

Nowadays, more and more techniques rely on human intervention so as to ensure the applicability of testing approaches. Indeed, a trade-off has to be found between the relevance of the test cases (requiring strong human intervention) and automation. Scenario-Based Testing addresses this issue by looking for more automation, with human intervention restricted to insightful activities. Over the years, different scenario based testing techniques have been developed to assist the validation engineer, using textual scenarios such as regular expressions, graphical notations such as UML interaction diagrams or test purposes specified as transitions systems. All these techniques represent an efficient solution to the state space explosion problem by restricting the possible executions of the system to a limited, and hopefully more accurate, subset of admissible traces. In addition, they make it possible to capture the human expertise for testing specific situations that can not be targeted by a systematic model coverage approach.

This first edition of the workshop on Scenario-Based Testing aims at gathering ideas and techniques in the area of semi-automated testing. It is intended to assess the effectiveness of available techniques and promote original research ideas that can be concretized into an industrial context.